It’s Okay to Not be Okay Episode 3 and 4 Recap: 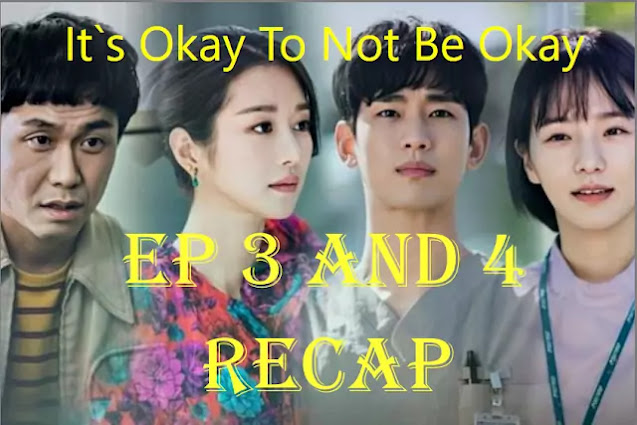 ‘It’s Okay to Not be Okay’ episode 3 is titled ‘The Sleeping Witch,’ while episode 4 is titled ‘,

In the third episode, Moong-young follows Kang-tae everywhere, but he is firm on his decision to stay away from her. Director Oh asks Moong-young to teach the people at the hospital’s therapy program. After initial reluctance, she accepts the offer. Jae-soo, Kang-tae, and Sang-tae are living at Ju-ri’s place. Moong-young goes to her childhood mansion and lies on the bed but is awakened by an evil spirit floating above her, warning her about the danger lurking over Kang-Tae’s life. A VIP-patient, Kwon Gi-do escapes the hospital with Moong-young and creates quite a ruckus in the city before getting up on the stage and unmasking his assemblyman father’s cruel nature to the public, requesting them to not vote for him as he is the reason why Gi-do has gotten mentally ill.

In the fourth episode, Kwon Gi-do emotional speech forces his father, assemblyman Kwon, to resign. Kang-tae grabs a meal with Moon-young and she asks her to read ‘Zombie Kid’ which is stuck in a court-approved injunction case. Juri’s hatred for Moon-young grows exponentially as she asks the director to fire the author from the hospital. Kang-tae advises Moon-young to take her father for a walk while getting off her car. Moon-young finally confesses her feelings for Kang-tae but he seems unbothered. Kang-tae argues with Gi-do’s father when he commands the director to keep Gi-do locked up forever.

Sang-tae is starstruck upon meeting with Moon-young and proceeds to click selfies but is interrupted by Kang-tae who asks Moon-young to stay away from his brother. Moon-young takes her father for the walk but ends up getting strangled by him, as he utters the words, “Die, you monster.” Kang-tae breaks down upon reading Moon-young’s book as it reminds him of the time he spent with his mother. Jae-soo barges in to let Kang-tae know that Moon-young was attacked by her father. Kang-tae’s gets on Jae-su’s bike and finds Moon-young, walking alone in the rain. They pause for a moment, lock their eyes, and embrace each other.
You May Also Like:-